Following a period of public consultation, the Wokingham Town Centre Regeneration Team submitted a planning application for the redevelopment of the Carnival Pool site. The application was hybrid, in that it sought full planning permission for a new multi-storey car park, including a relocated bowling alley and laser play facility, and outline permission (with a detailed plan to follow in due course) for a new leisure complex and residential apartments. 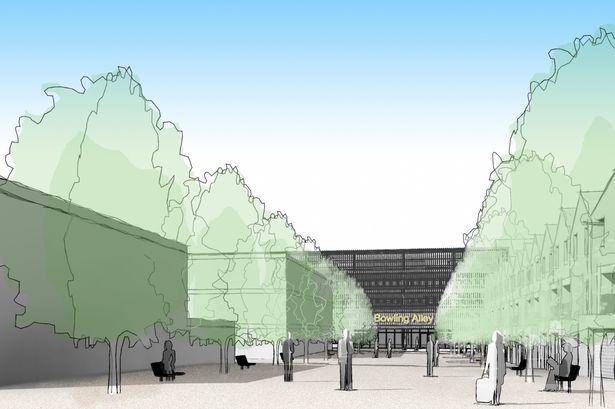 The Borough Planning Committee met on Wednesday 22 June 2015 and, after considering views from members of the public, including those of the Wokingham Society as presented by its Chairman, voted to approve the application.

Building work on the multi-storey car park started in the Summer of 2016 and was finished by Summer 2017, with the new bowling Alley opening for business in November 2017.

Plans for the rest of the site were changed since they were first presented in 2015, with the proposed addition of a new Library and the swimming pool being rebuilt rather than just refurbished. Those plans were submitted in an application to the Borough Council’s Planning Committee and the Society’s response to these new plans can be seen here.

There were separate discussions with the public about the proposal to relocate the Library to this site. Notwithstanding the concerns expressed by the Society and others, the plans for what is called Carnival Phase 2, including a new library, were approved in November 2017. The design for the apartments on the west side of the site was, however, withdrawn and new plans were submitted in January 2020. The response of the Society’s Executive Committee can be seen here.

Now that the new Bulmershe Leisure Centre Is complete and opening for use as and when Covid rules allow, and there is thus a sports facility in the area, demolition has been completed on the Carnival Pool site and rebuilding has commenced.

In July 2020 the Regeneration Team submitted a revised application for the leisure centre and new library, giving the following reasons: “The amendments have been progressed in direct response to the Council’s declared Climate Emergency with a view to significantly increasing the energy efficiency of the building and thus reducing carbon emissions. The footprint of the complex will reduce slightly from what was previously approved, but through rationalizing the internal layouts and introducing first floors into what were previously shown as double height spaces the energy efficiency of the building would be considerably improved without compromising the ‘leisure centre offer’ at the site. The pools, sports hall, gyms and studio spaces etc. remain as big (or bigger) as was previously shown and the footprint of the library remains pretty much the same (still 1,000 sqm)”. The Wokingham Society’s Executive Committee largely supported these proposals, which were approved in October 2020.

Work on the leisure centre and new library is well under way. The Borough Council announced in July 2021 that it was planned to incorporate a 450-seat theatre in the large sports hall/leisure area and that some rooms intended for other uses would now be converted to a green room